A downloadable Slime for Windows

11/12/18 - R.I.P. Stan Lee, the creator of Doctor Strange, Excelsior to your family, friends, and to all of your achievements.

This game is a parody, as such no donations are asked for, nor will they be accepted.

Version: 1.3 (Previous version available from RMN, It will be updated there as well.)

Therese, of the RTP, has developed a severe case of tsunder-enza! This could develop into the highly contagious trope-itosis. Sadly, Harold has no idea that this problem even exists. To prevent the entire slime-verse from contracting such an annoying disease, Doctor Slime will have to talk to NPC's, Find an item, and tolerate the slimed version of the universe.

Until now, the mysteries of the slime have been, well, mysterious! However, the public will soon know that slimes navigate through the multi-slime-verse via plumbing. An invention for our convenience, is their hyper-drive, worm-hole, or warp.

This is my entry for the 10 event / 1 map challenge. The game, which is only slightly more than a narrative, is a spoof of Doctor Strange with a few re-imagined characters as slimes. Don't expect an epic journey, or a massive story in multiple parts. The actual purpose of this title is just to provide the player with a chuckle. In fact, it is so small that combat would likely have gotten in the way of the short little narrative.

To fall under the fair use clause for a parody the following must be stated: I make no claim of ownership of the source material (Doctor Strange); furthermore, this derivative work is meant to be both free and a compliment to the source material. Finally, any likeness to persons real or fictional outside the scope of the parody is purely coincidental.

Play as a Slime! Play as a slime with a HAT! There are not many other features to speak of, but this short narrative should be fully functional. The game uses several plugins, and a nifty common event that allows plumbing to be used for navigation. The game has only one real purpose, to provide the player with a few laughs. 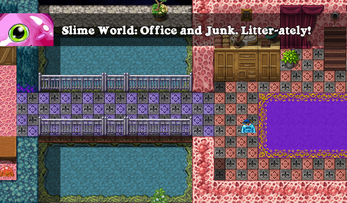 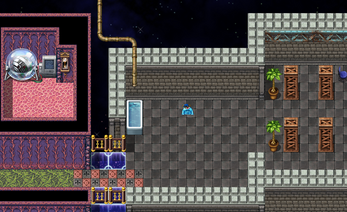 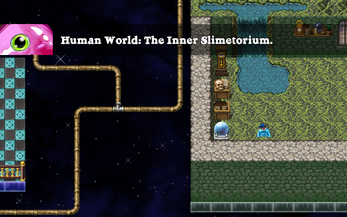 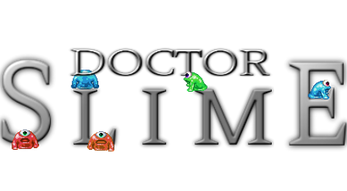